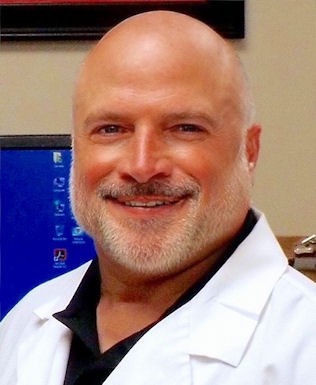 By KEVIN CHIRI, The Slidell Independent

It’s not hard to understand why Dr. Wade Estopinal enjoys his day-to-day routine of seeing patients at his Slidell clinic.

Estopinal got the most challenging start imaginable in his medical career, working at the former LSU Charity Hospital system in the emergency room, where he saw every bit of trauma a physician could encounter.

“We had some nights when there were 10 to 12 gunshot victims,” he said. “It was really very sad to see so much violence like that, and realize there were a lot of people who had nowhere to turn in their lives. So much social injustice out there—it was a sad situation to see.”

The compassion from Estopinal is something he carries with him to this day, now one of the co-owners of Doctor’s Urgent Care clinic, located at 985 Robert Blvd., St. 101. Life in his daily clinic work is an abrupt change from the challenging experience he gained during his days of training at Charity.

“No matter what else is happening, as a doctor, my work is all about the patients,” he said. “I know some people believe doctors don’t care enough, but with me, that’s all I care about.”
Estopinal had a strong family to teach him those values. Growing up in Marrero, he was one of nine children who were taught one important lesson from their dad: “money doesn’t grow on trees."

“We were working from a young age,” he said. “I had a paper route I operated every day for 17 years, taking me into college.”
Unlike most young people who enter college and still are uncertain about what career they want to follow, Estopinal said the Catholic upbringing from his mother and father seemed to guide him from an early age.

“I grew up knowing I wanted to serve in some capacity, and as a Catholic, I figured it was either to be a priest or be a doctor,” he said. “I began volunteering in high school at Jo Ellen Smith Hospital, and then I knew I wanted to be a doctor.”

For Estopinal, the only question was what field of medicine he would enter and as he began taking different rotations as an intern, he quickly found a love for emergency room medicine.

“I liked it because it let me deal with every kind of situation you could imagine,” he said. “I had the trauma, I helped people with injuries and I even got to deliver babies. It was kind of like being an old-fashioned doctor who went to see families and handled everything. I really liked that.”
Estopinal believes most doctors “are born to be in this field,” and he sees himself the exact same way.

“I have a deep faith and I believe God gives people like me the tools to do this,” he said. “It certainly takes a special person to live this kind of life and deal with the things we face''

He came to Slidell to work in the emergency room in 1993 and continued as an E.R. doctor for many years, until Katrina struck and brought about a new opportunity.

“I had joined with Dr. (Charles) Preston in his local clinic in 2003, along with two other doctors,” he said. “But after Katrina, only he and I were left there, and we were the first clinic to open in Slidell, so we were very busy.”

He said it forced him to choose between the clinic or the E.R., a decision he is thankful for today.

“I’ve got three wonderful children and now looking back, I feel blessed that I was forced to choose one thing, and I chose the clinic,” he said. “Now I am home at normal hours and I spend more time with my family.”

“It was a real blessing that Katrina forced me to change what I was doing,” he added. “Family is everything. I probably would have burned out from the E.R. work if I hadn’t been forced to choose.”

“When I walk in the door of a room to see a patient, everything else gets put aside,” he said. “I care about this community, and the patients I see, and I want to do my best to help them. As I said before, I think it is actually a calling to be a doctor, and I love that I am doing this.” 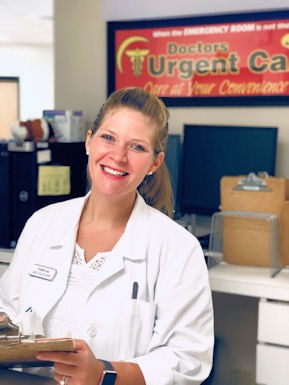 By CHRISSY SMITH, The Slidell Independent

Aimee Coulon is an advanced family/emergency nurse practitioner who has traveled the world to work in the medical field and help others, but now she says she feels settled in Slidell as a NP for Doctor’s Urgent Care.

Although only 30 years old, Coulon has more experience than most her age. She started college at age 16, and was a junior in college by age 18. She said at that point she knew she had to pick a career path, but was not initially sure of what to do. “My dad and I talked and he told me it was time to pick a path. I did some soul searching and praying, and all I could remember was that at age seven, I said I wanted to be a missionary so I could help people. It was then that I knew I wanted to go into the medical field,”

Coulon said. Originally from Monroeville, Alabama, Coulon went to Springhill College in Mobile, Ala. where she graduated with her bachelor’s degree in nursing. Although most nursing school graduates need actual work field experience before being accepted into nurse practitioner school, Coulon got right in because of her stellar reputation.

She graduated in 2009 with her nurse practitioner degree, and moved to Slidell where she took a job in New Orleans. “I knew I didn’t want to stay in my hometown, but I still wanted to be close to my family. New Orleans just made sense to me, and I was living in Slidell so I was only three hours from my family,” Coulon said.

While living in Slidell, some of her friends introduced her to a man who is now her husband. Although the two hit it off, Coulon said she was in a dilemma because she already had made plans to move to New Zealand. “I knew if I didn’t go through with the plans I had been working on, then I might never do it. I told (husband) Chad that I needed to still do this and he completely agreed,” Coulon said. So she left for New Zealand where she said her eyes were opened to a whole new mindset. She worked in the emergency room in New Zealand, but traveled around doing other types work to help others. “We brought items to kids at the tribes like coloring books and things we take for granted here. The women would make things we could buy, and if you just bought one thing it was be a big deal to them. In New Zealand, there wasn’t a lot of crime and we walked everywhere,” Coulon said.

While there, Chad visited a couple months in and the two went on a four-day hike that Coulon said really brought them together. Several months later, Coulon’s family, along with Chad, came back to visit, and Coulon said it was a magical time. “We went on a helicopter ride to the top of a glacier where Chad proposed to me,” Coulon said. “My family was there and took pictures of it all. It was really surreal.” The couple decided to get married right after Coulon returned to the states on July 11, 2013. She and Chad then planned a wedding and reception that their whole family could attend. “I knew that my home would now be in Slidell because that’s where Chad and his son lived.

I had been back for maybe two months and was not looking for a job yet. But we were leaving the gym, and there was a little business expo going on so I stopped by the booth at Doctor’s Urgent Care,” Coulon said. She talked with CFO, Scott Leonard, for almost 45 minutes and things just clicked. “The people here are great, and everyone gets along so well. I have worked a lot of places, and this is by far the best place I’ve ever worked,” Coulon said.

The nurse practitioner says after traveling and accomplishing those goals, she is now focused on her family in Slidell with her husband, and three amazing boys. “Life is just getting better and better.” 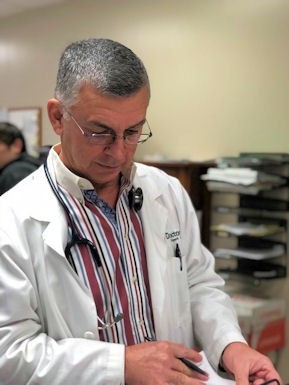 Dr. Peter R. Galvan is an internist in Slidell, Louisiana. Galvan served in the U.S. Navy and was honorably discharged with commendations before he started his medical practice. He received his Doctorate of Medicine from Louisiana State University School of Medicine in 1989 and has been in practice for more than 30 years.

He is fearless when it comes to medicine and confronting the medical challenges that are involved in defeating a pandemic. Dr Galvan has earned the respect of the patients he treats and the Team he works with by his professionalism, wit, attention to detail, boundless experience and hard-won knowledge. He helped the clinic develop treatment protocols and kept up with new studies and scientific documents detailing the challenges of treating COVID-19. He has saved more lives in our community than we can count, and we are grateful for him as a medical provider.